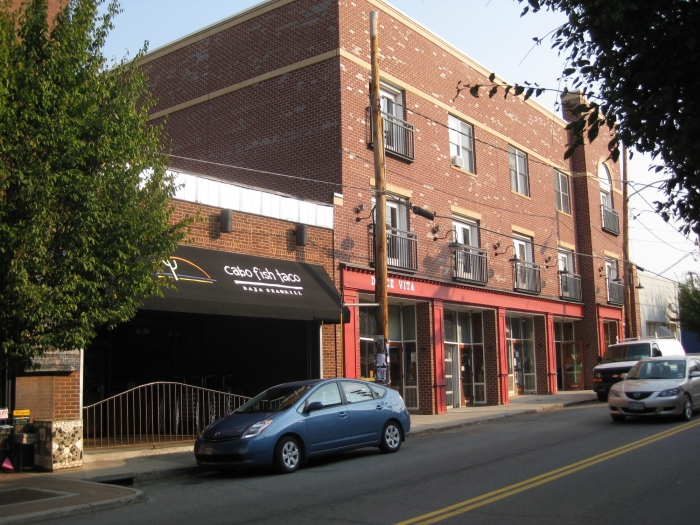 Not all commercial areas in Charlotte look the same as the one the NoDa neighborhood. So, planners ask, why should the city zoning ordinance not take into account that different places might look different? They call the concept Place Types. A public workshop Saturday will explore the city’s new approach to its zoning ordinance. Photo: John Chesser

If you pay attention to Charlotte growth topics, you may have heard some unfamiliar words recently: Place Types. UDO. If you’re not a planner or a developer, or even if you are, those terms may baffle you. We hope what follows can help you sort out what it all means.

Why now? The City of Charlotte hosts a public workshop, the “What Can U-DO? Summit,” on Saturday to help the public better understand what’s going on and give input. Register here. The workshop is 8:30 a.m-1:30 p.m. at the UNC Charlotte Center City building. It includes lunch and a keynote from national planning expert Mitchell Silver, formerly Raleigh’s chief planning and development officer. Since 2014 he has been commissioner for the New York City Department of Parks and Recreation.

Mitchell Silver talks about the need for a city vision

Silver’s appearance is courtesy of the project Building Community: People + Places + Partners, a coalition of Charlotte Center City Partners, the City of Charlotte and the UNC Charlotte Urban Institute. The partnership is funded with a grant from the John S. and James L. Knight Foundation.

Because those separate documents have been updated many times, some ordinances and regulations contradict one another. That makes following them difficult. As the UDO work continues, planners say those contradictions will be brought to light and updated.

OK, I GET IT. BUT WHAT ARE PLACE TYPES?

Many people are familiar with land use categories found in conventional zoning ordinances like Charlotte’s. Those are categories like “single-family residential,” “multifamily,” “business,” “‘industrial,” etc. In conventional zoning, certain parts of a city are designated for only those specific uses. That’s called single-use zoning. 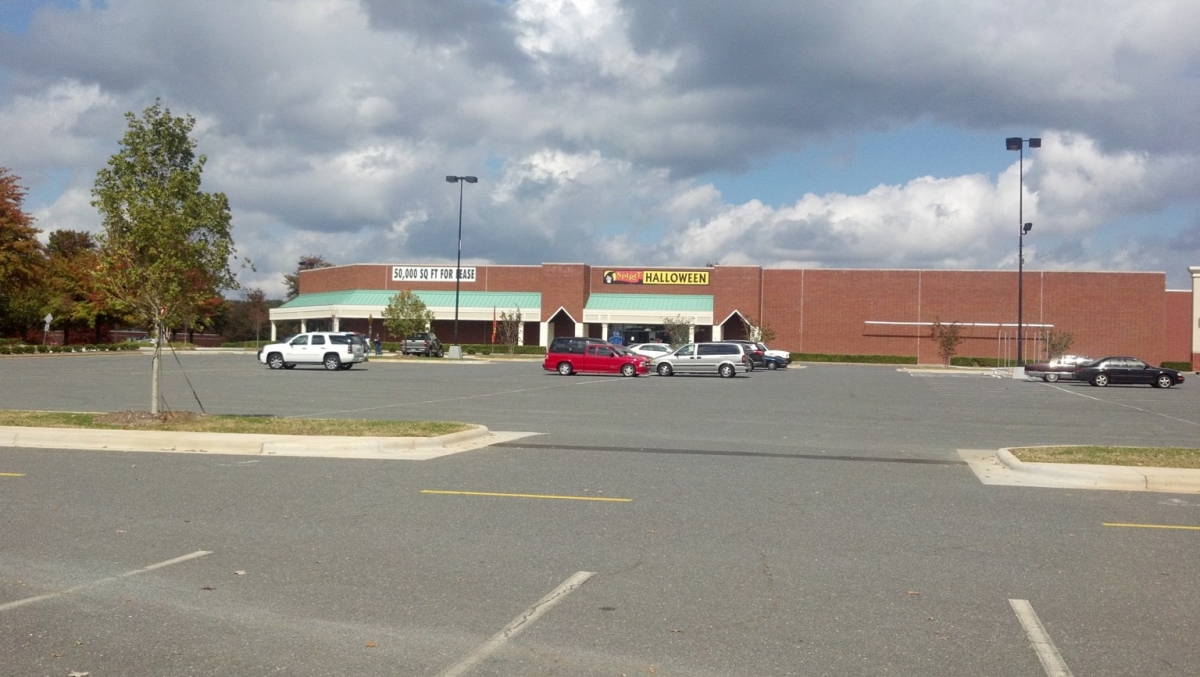 As Charlotte rewrites its zoning ordinance, city planners want it to be better at requiring the kind of development city plans have called for. If a plan says an area should be a “walkable urban village” but the zoning ordinance is producing strip shopping centers in large surface parking lots beside streets carrying fast-moving traffic, that’s a disconnect.

Instead, planners want Charlotte’s residents to envision what places should be like, how they would look and function. Then, the zoning codes would be written to produce those places.

“The last time we did our ordinance was 1992,” says Charlotte Planning Director Taiwo Jaiyeoba. “We have an opportunity now to change or shift this future. … We’ve got to make sure that everyone participates and that everyone’s voices are heard.”

The new zoning codes themselves would have more specific language than in the past,  plus – this is different – a lot of illustrations. Different types of neighborhoods and commercial areas would be different “Place Types.”

Both the conventional zoning and Place Types determine if an area is residential, for example. But a Place Type goes a step further to determine what we want that residential area to look like, compared to a different residential area. For example, think of the differences between Plaza Midwood and Fourth Ward and more suburban neighborhoods like Piper Glen or Coulwood. All have unique characteristics. Using Place Types would help the zoning ordinance recognize those characteristics and create a policy that encourages development that fits in with what plans for the area envision.

Below is an image from the draft of a proposed Place Type for one of several kinds of neighborhoods. This one has some single-family houses but also townhomes and other small-scale multifamily like duplexes and quadraplexes.

HOW PLACE TYPES WOULD DIFFER FROM OLDER ZONING ORDINANCES

Place types don’t focus solely on the uses of the land and buildings but also on what the buildings will look like,such as: What size are they, how far from the street or from the building next door are they? Those details affect how a place feels when you’re there.

Much like today’s ordinances and regulations, Place Types would guide development, but one key difference is that they are also a vision for the future.

The drafts of Place Types offer guidelines for how tall the building can be, the amount and location of open space and parking, and setback – the minimum distance a building must be from the property line. 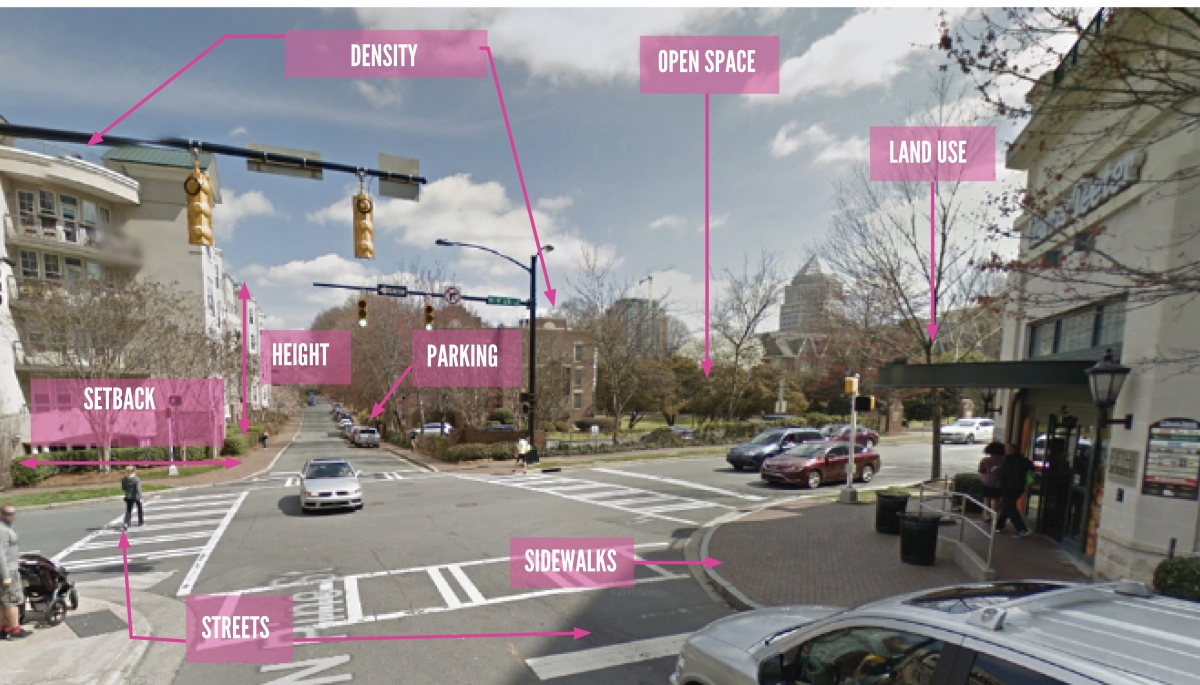 As the city works on its UDO, planners want residents to understand and give their input. Zoning ordinances determine what can be built around your home, your work, or even your favorite park or brewery. A zoning ordinance can create chaos or it can create order and character.